How To Invest In The NFT Boom Without Buying Art

There’s a digital gold rush happening in the NFT space.

Individuals have made generational wealth with CryptoPunks rallying 570x year to date and Bored Apes rising 180x  since its launch in April 2021.

That said, while it can be lucrative to invest in good NFT projects, picking the right projects is tough, with around 5-10 new NFT projects being released  every single day.

Meanwhile, buyers will probably face a fair amount of concentration risk when buying a “blue chip” NFT like a CryptoPunks, which have a floor of at least USD 340 000 (unless of course, if you have a multimillion dollar portfolio).

NFT marketplaces are the picks and shovels of the NFT space.

Picks and shovels investing was popularised by Samuel Brannan, who indirectly capitalised on the 1840s Gold Rush, famously flipping picks, shovels and pans for 75x in 9 weeks.

Over the course of a year, monthly volumes at NFT marketplaces have risen 250 fold from USD 14 million at the start of 2021 to USD 3.5 billion in August. 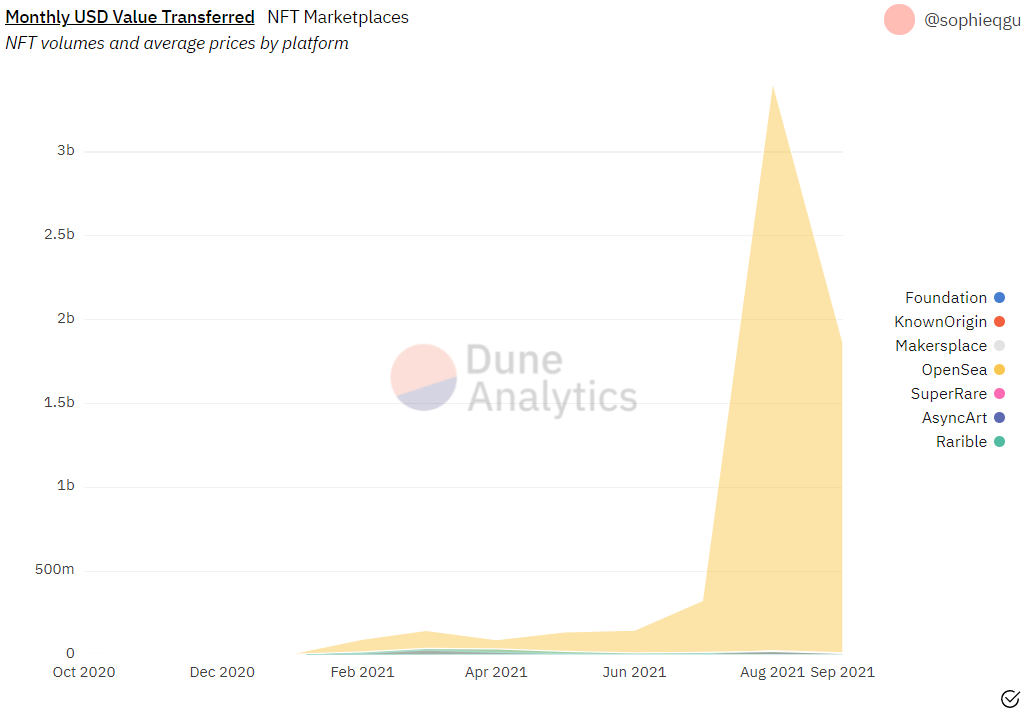 NFTs are digital assets that take mere seconds to settle on the blockchain. This contrasts with trading physical goods which can take significantly longer to settle.

The speed of asset turnover results in significantly higher trading volume in NFT marketplaces relative to other secondary marketplaces.

Platforms typically take a percentage cut of each sale, which can range from 2.5% to 5%. Of course, with the parabolic rise in sales in the past year, fees received by these platforms have also skyrocketed.

NFT volume is currently dominated by OpenSea, which had more than 90% market share as of August 2021. The platform last raised USD 100 million at a USD 1.5 billion valuation but does not (yet) have an investible token.

It has smaller but also established competitors such as NiftyGateway, Foundation, Rarible, SuperRare, KnownOrigin are keen to take market share. Of which, only Rarible and SuperRare have tokens and are investible which trade in the mid to high teens price to sales ratios.

There are also some other up-and-coming marketplaces. Notable ones include Shoyu (operated by decentralised exchange Sushi), NFTx (a few days old), Universe and Genie.

Apart from Genie, all of the other new NFT marketplaces have investible tokens.

For the projects without tokens, it is well worth noting that historically crypto projects (including SuperRare and Rarible) have retroactively handed out tokens to users for free.

During the 1840s Gold Rush, being a miner meant relying on luck to strike gold. But investing in picks and shovels  allowed speculators to participate in the Gold Rush with less risk.

Sam was previously an equity research analyst covering ASEAN property developers and REITs for 5 years. Based in Singapore, he is currently a strategy and ops manager at a global start-up.

Whether You Fear Or Embrace It, Cryptocurrency Regulation Is Here To Stay

The Blockchain Trilemma: A Crypto Nerd’s Perspective On Interoperability

Get news and insights on the Asian markets that matter.

View our past Newsletter